Now going in I didn’t really know what to expect with Yonder but what I found was a unique adventure game that I enjoyed from start to finish even if it had got a few wonky parts along the way.

The first 10 minutes of yonder draw from Zelda’s history. The game starts with you on a galleon heading through the seas towards and island of Gemea very reminiscent of the Wind Waker. As the boat crashes and you end up washed upon the shore and find yourself trekking through a cave until you emerge with the camera panning over a vast land reminiscent of the opening scene of Breath of the Wild.

At its hart Yonder is part Zelda, part Stardew Valley and part single player MMORPG. The most unusual aspect of the game however is that there is absolutely no combat. Instead you are given free reign (almost) of the island and can travel around it completing quests, discovering secrets and building up your farm and crafting.

The main quest line sees a mysterious force called the Murk covering up parts of the world making some areas inaccessible from the start. These can be removed by collecting Sprites, little fairly like creatures. This is where the game becomes even more breath of the wild like as a large proportion of the content involves completing fetch quests and searching for things that might as well be Korok seeds. While this doesn’t sound that appealing somehow it way. I found myself lost in this world eager to play more and bizarrely I think the lack of combat helped this. Rather than a thrilling action ride this was calm and relaxing with very little to worry about.

The world is a little empty but there are plenty of nooks and crannies to find secrets in and the NPCs you encounter are charming and well written. One of the biggest downsides to the game however is travel. The island is fairly large and it is very difficult to navigate. The in game map is very unclear when it comes to versatility and often it can take a long time to work out exactly how to get to that spot on the may that seems like it should be over the next hill.

at Yonder: The Cloud Catcher Chronicles overall is a lovely little game that is worth playing if you are looking for something relaxing. It has flaws but the overall game is definitely worth more than the sum of its parts and oddly even though it borrows almost every part of its game from other franchises it ends up being one of the most unique adventure experiences I have played in a long time because of it. 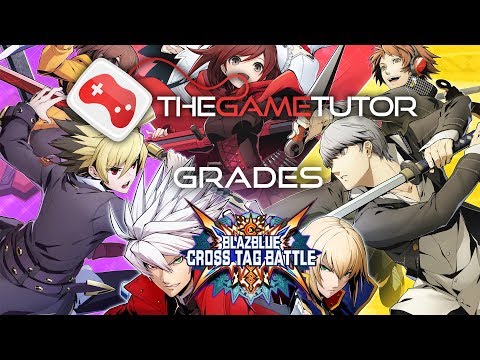 Now BlazBlue has been a favourite fighting franchise of mine for years and this game sees a crossover with the Persona, Under Night, and RWBY franchises for a 2v2 fighting game.