Developer Compile Heart is a Japanese anime game developer that has released some decent games over the last few years, Gun Gun Pixies original released on the Vita a few years back however is definitely not one of their best efforts.

So the game sees you take control of an elite group of alien pixies who have been sent to earth to study human behaviour by invading a girl's dormitory studying their behaviour and keeping them happy by shooting them in their "sensitive" areas (I am not making this up).

Sadly the game just doesn't gel, moving around and jumping is clunky and considering in many parts this is a stealth game controlling your pixie is difficult. This is made all the more difficult by the camera work that gets stuck in tight spots and causes all sorts of problems.

The story is OK but very confusing and it is rarely evident why most of what is happening is actually happening. One saving grace is the relationship between the 2 main characters that is sweet and heart warming and definitely stuck out.

The shooting sections are decent enough and this is the one area of the game that controls well but the enemies and rooms are all very samey and there definitely could have been a lot more variation in this regard.

To sum it up Gun Gun Pixies is fine if all you are looking for is anime curves but recent games (some by the same dev) have proven that we can expect more from this type of game in 2019. 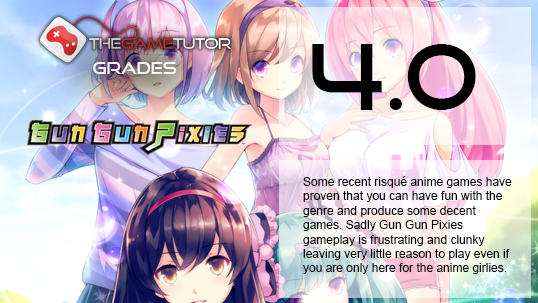 Released on last gen consoles over 3 years ago Dance Magic finally arrives on PC and having received fairly negative reviews at the time I am looking at the game with an open mind.